***perhaps what they all celebrate here is le passé pur (& simple), but the imbalance of this movie is much more truthful to...

"Esse era um dos seus segredos. Nunca se permitiria contar, mesmo a papai, que não conseguia pegar a coisa."
Clarice Lispector
"E a escuridão?"
Andrew Gleiser
"The children all around us are so calming, so elevating!"
Webern to Hildegard Jone (translated and quoted by Malcolm Hayes)
"When one is a child, one has such enormous categories that they would now almost make one dizzy."
Constantine Constantius (translation by M. G. Piety)

"... by the age of about ten or eleven most children have learned what Piaget calls the 'correct' view, namely that thoughts are located inside the head... younger children believe that they travel outside their bodies when they dream... that thoughts are in the mouth, breath and air."
Rupert Sheldrake
"... when I was still a child, I went to the meditation hall to practice in the middle of the night without anyone's knowledge, seeking to attain true faith and wisdom... In observing the practices of the masters of the exoteric and esoteric teachings, I was grieved by their outrageous behavior about which I did not know what should be done..."
Myoe (Mark Unno, Shingon Refractions)
"The worst event of the early months was the incident described in A Portrait and confirmed by Joyce to Herbert Gorman, when another boy broke Stephen's glasses and Father Dolan pandied the victim on the mistaken premise that he had broken the glasses himself to avoid study... Joyce was to speak of Father Dolan later to Gorman as 'low bread'... He did not submit, but went home crying to his mother, who comforted him and mended his clothes."
Richard Ellmann 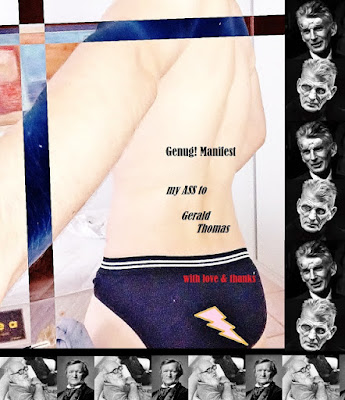 "I always thought a punk was someone who took it up the ass."
William Burroughs (Please Kill Me)
"... and he points to Bowie, this funny little white-skinned guy sitting over in the corner."
Paul Morrissey (Please Kill Me)
"Look in the mirror. You are unemployable."
Julian Cope (magazine anecdote)
"Try to catch the deluge in a paper cup..."
Crowded House
"When I hit 15 my vision turned green..."
Tommy Cash
"She had a Russian-sable coat that must have cost a small fortune... she seems sort of—sort of dyed and unclean, if you know what I mean."
The pretty girl in yellow
"Désormais on le reconnaît dans la rue, on le montre du doigt au café, à l'Opéra, chacun renifle l'odeur de scandale qu'il traîne après lui."
Sophie Chauveau (Manet Le secret)
"An unpleasing thing, and framed in Mr. Whistler's odd fashion."
(City Press)

"I was sayin let me out of here before I was
Even born—it's such a gamble when you get a face
It's fascinatin to observe what the mirror does
But when I dine it's for the wall that I set a place..."
Richard Hell
"John Holmstrom showed it to me, and it was a cartoon! I read the Lou Reed interview quickly, and I could see that everything that was humiliating, embarrassing, and stupid had been turned to an advantage. And that's when I knew that Punk was going to work."
Mary Harron (Please Kill Me)

"... before World War I, 'A ballet dancer was available for any man at any hour in Vienna for two hundred crowns'. To marry someone with such associations could destroy even a well-established career."
"Morgenstern was astonished to learn that Gödel took an interest in ghosts, and he was very dismayed by Gödel’s choice of wife, whom he described as 'a Viennese washerwoman type: garrulous uncultured, and strong-willed'."
"Gödel’s fondness for telephone conversations, his difficulty in ending them, and his insensitivity to other’s sleeping habits have been attested by a number of informants."
[From John W. Dawson Jr, Logical Dilemmas: The Life and Work of Kurt Gödel (Wellesley: A. K. Peters), 1997]

"Pure experience is an animated state with maximum freedom in which there is not the least gap between the will's demand and its fulfillment."
Kitaro Nishida

"... seated meditation. Give up all relationships and let all things be. Neither good nor evil are thought of."
Dogen/Yasuo Yuasa

"La Terre transcendantale n'est pas un objet et ne peut jamais le devenir; et la possibilité d'une géométrie est rigoureusement complémentaire de l'impossibilité de ce qu'on pourrait appeler une 'géo-logie'..."
Jacques Derrida
"... When I described them to the engineer in charge, he informed me that the high one was my nervous system in operation, the low one my  blood in circulation. Until I die there will be sounds. And they will continue following my death. One need not fear about the future of music."
John Cage (Experimental Music)
"... Nothing is a pleasure if one is irritated, but suddenly it is a pleasure, and then more and more it is not irritating (and then more and more and slowly). Originally we were nowhere; and now, again we are having the pleasure of being slowly nowhere. If anybody is sleepy, let him go to sleep."
"...  when you sing, you are where you are..."
John Cage (Lecture on Nothing)
"Nichts überhaupt mehr annehmen, an sich nehmen, in sich hineinnehmen, — überhaupt nicht mehr reagiren..."
Nietzsche

Piet Mondrian (traduction par Michel Seuphor)
"Et pourtant tout le tableau est riche. Riche, somptueux et calme le tableau."
A. Artaud
"For Art and Joy go together, with bold openness and high head, and ready hand—fearing naught, and dreading no exposure."
Whistle
"There is always activity but it is free from compulsion, done from disinterest. And we are free to stop brooding and to observe the effects of our actions. (When we are proud, that pride keeps us from observing very clearly). And what do we observe: the effects of our actions on others or on ourselves? on ourselves; for if the effects on us are conducive to less separateness, less fear, more love, we may walk on then regardless of the others."
John Cage (Lecture on Something)

"He came home to a young wife he didn't really know with a four-year-old son to take care of, a four-year-old that he doubted was his in the first place... I don't think he ever knew what I did, or what any of his children did in the world, really. He was on his own course into the setting sun, and damn and blast anyone else..."
Lol Tolhurst (Cured: the tale of two imaginary boys)


"Je suis dans la chambre de ma mère. C'est mois qui y vis maintenant."
Molloy
"According to her, I was a razor-toothed succubus."
James St. James
"... le dieu muet la bête, une eau dormante au fond désormais apaisé de l'abîme..."
Derrida, l'elit/Cixous
"... so that at last it is seen that there is no sound bottom."
Aleister Crowley, Liber 777
"Have you not forgot to wind up the clock?"
Elizabeth Mollineux

"The child's identity is to be found in that look, just as its terror of identity's loss is prefigured in its withdrawal... For the imaginary relation, transcending the square by crossing it diagonally with a channel of visibility, reflecting the subject back to himself in the smooth surface of its mirror, plunges the other half of the graph into darkness..."
"So it was not [Picasso] who had violated her silence, provoking the extremes of this reaction. It had been the click that had troubled her, as it created its own rhythm within the immobility of the pictorial image..."
Rosalind Krauss, The Optical Unconscious 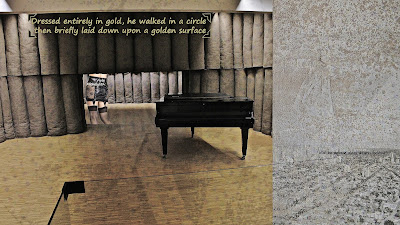 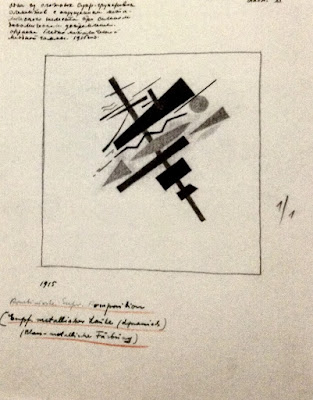 "Writing a novel, Joyce said, was like composing music, with the same elements involved. But how can chords or motifs be incorporated in writing? Joyce answered his own question, 'A man might eat kidneys in one chapter, suffer from a kidney disease in another, and one of his friends could be kicked in the kidney in another chapter.' As a matter of fact, he announced, his book was to be among other things the epic of the human body. One organ or another would dominate each episode. To override the dichotomy of body and soul, to reveal their fundamental unity, he was displaying the mind's imagery under the influence of particular physical functions..."
Richard Ellmann
"The glass houses of Mies van der Rohe... There is no such thing as an empty space or an empty time... try as we may to make a silence, we cannot. For certain engineering purposes, it is desirable to have as silent a situation as possible. Such a room is called an anechoic chamber, its six walls made of special material, a room without echoes. I entered one at Harvard University several years ago and heard two sounds, one high and one low. When I described them to the engineer in charge, he informed me that the high one was my nervous system in operation, the low one my blood in circulation. Until I die there will be sounds. And they will continue following my death. One need not fear about the future of music... But this fearlessness only follows if, at the parting of the ways, where it is realized that sounds occur whether intended or not, one turns in the direction of those he does not intend. This turning is psychological and seems at first to be a giving up of everything that belongs to humanity, for a musician, the giving up of music. This psychological turning leads to the world of nature, where, gradually or suddenly, one sees that humanity and nature, not separate, are in this world together; that nothing was lost when everything was given away. In fact, everything is gained."
John Cage (Experimental Music)
**************************************************************

A very interesting proposition:
- "What can music tell us about the nature of the mind? A Platonic model," Brian D. Josephson & Tethys Carpenter (text from a conference proceedings);

Some topics of Mesoamerican history & thought