Environmental Issue (Brazil): A new harbour in Torres (RS)?! Who benefits? What is the logic behind it? 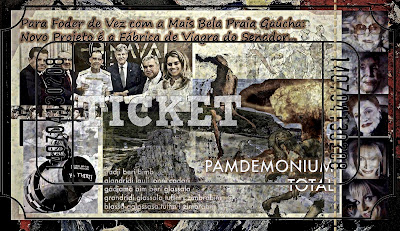 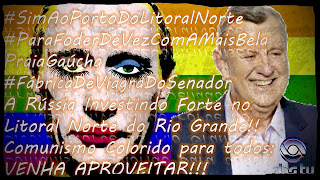 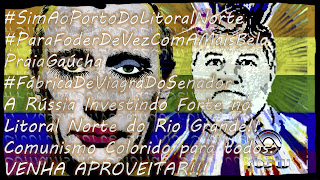 Praia Paraiso/Fev 2019 (Torres is a municipality constituted by several small beaches; this is exactly the place where they intend to build the harbour);
Praia Paraiso/ Sept 2015 (the south of Brazil has a very unstable weather; in Torres there is even the recent record of a massive hurricane-like cylone);
(more A/Z photography, see here);


According to a report published last January 9 (2019), in the newspaper Zero Hora the idea was proposed by the civil engineer Fernando Carrion and senator Luis Carlos Heinze, of the political party PP (not to be confused with PT).
Who is senator Heinze?
According, for instance, to another report recently published in Yahoo News (October 23, 2018), here are the senator's credentials:
'Linked to the rural sector of Rio Grande do Sul (a state that stands out for its agricultural production) [actually, Rio Grande do Sul is nowadays an indebted state having problems to pay even its public employees, which was, but this a very long time ago, a state that stood out for its agricultural production], Heinze works on renegotiating [big] farmers' debt and is [as much as Jair Bolsonaro] critical of the demarcation of new indigenous areas. In 2014, during a public hearing in Vicente Dutra [a small town of Rio Grande do Sul], Heinze declared that quilombolas [in Brazilian hinterland, traditional communities of African people founded originally by escaped slaves during the shameful period of Brazilian legal slavery], homosexuals and Indians were "people of the worst kind, worth of nothing," and suggested the recruitment of private security by the rural producers to maintain the possession of their lands. He later told the press that his statements (videotaped on social networks) were made in the middle of a heated debate concerning the conflicts between indigenous people and farmers... Also in 2014, Heinze voted against a Constitutional Amendment that stipulated the expropriation of lands from landowners who were caught submitting their workers to a regime analogous to slavery...'
Heize was born in 1950, the engineer Fernando Carrion in 1942 (according to information on a website of the Getúlio Vargas Foundation).
Although Heinze usually presents himself as defending perspectives opposed to the previous PT (Worker's Party) governments—especially that of Dilma Rousseff, to the impeachment of whom he contributed—the affinity between the logic behind the harbour's project and the logic behind the macroeconomic actions of the previous governments is conspicuous.
The growth of the country is thought, above all, in terms of megalomaniac projects, very much dependent on strategies totally indifferent (if not deleterious) to the natural environment, and within a completely outdated 19th-century matrix of economical development based almost exclusively in large-scale extractive production and the exportation of commodities.

***According to a report in the Jornal Nacional (April 24, 2018), Luis Carlos Heinze's party (the PP) "is one of the most investigated parties in Car-Wash scandal." Another politician of PP directly involved in the project for the construction of the harbour is Ovídio Deitos, a businessman of the building sector who is also the president of the PP party in the city of Caxias do Sul. Other businessmen of this city seem also to be involved. One should note that Caxias do Sul was indeed a very important industrial city, with big metalworking factors that are now in decline. Those businessmen didn't adapt well to the new globalized economy. The harbour might represent to them a supposedly survival alternative at the expense of the local population and the environment.
The proposal for the "new" harbour (which in fact remounts to the 19th century) looks pretty much like the old disguised as the new, which will, as always, benefit mostly if not only a lazy, backward state bureaucracy and half a dozen oligarchs from the private sector. Foreign investment would come from where? China, Napolis?!
The sea coast of Torres is important, for instance, to seals, sea lions and right whales. There are THREE protected areas that could be endangered: Parque Estadual de Itapeva, Refúgio da Vida Silvestre Ilha dos Lobos, and Parque Tupancy.

***As specialists know, the coast of Rio Grande do Sul lacks the granitic shores and protected bays of the coast of Santa Catarina (the next Brazilian state up to the North). This implies a series of risks, such as erosion, in the construction of this type of port in Rio Grande do Sul.
Moreover, as it is well-known, in Brazil, the maintenance of already existing and basic infrastructure, such as roads, has a huge deficit. In the midst of this scenario, what could be the point of building an entire new port from scratch?! And this in a country that was incapable of preventing the occurrence of a disaster in the scale and magnitude of the one occasioned by mining companies in Mariana?! And within only three years, also the tragedy of Brumadinho (see below), occasioned by the same companies, and killing hundreds of people?
The state of Rio Grande do Sul in particular doesn't stand out anymore for its agricultural production. Since a long time, it has lost ground to other regions. This is a state plagued by chronic economic problems.

In a new report published in the newspaper Correio do Povo (January 31, 2019), Heinze seems to be completely assured that the harbour will be built, mainly to export chicken & [transgenic] soy beans! It seems that much before it became publicly known, the project was being plotted sneakily:
- Porto privado em Torres tem projeto em andamento (Correio do Povo);

Other Environmental Issues Around the World:

'For Isra, when it comes to discussing the environment, it’s crucial to talk about environmental racism – i.e., environmental and climate change issues that specifically affect black and brown communities. “There’s a pipeline being built in my state (Minnesota) and it’s going straight through indigenous treaty lands and sacred wild rice beds,” she explains. “This pipeline will destroy their water and their sacred wild rice and also just ruin their land. Some places are more privileged than others.” More than anything, we should make sure people “recognise their privilege in the movement”.'
'As far as US Youth Climate Strike is concerned, Isra says, “we try and avoid things like sit-ins or a lot of marches, only because we deal with so many minors – we don’t want any of them to get arrested – especially with youth of colour. We try and focus on really safe forms of activism so everybody can participate.”'
'Everybody gets there at their own pace. It took me some time – it probably takes everybody some time. And whether or not you get media coverage or you get a great response it doesn’t mean what you’re doing is wrong. You should know what’s best for you and what you believe in, and nobody should be able to tell you any different.”'
'“It is a lot to handle, and it’s a full-time job,” says Isra, who is a high school student, juggling her school work along with her activism. “You have to make sure you balance time and that you get your priorities right.” Self-care is a must. “There are so many things that need to be tackled, but also you come first – make sure that you are OK enough to partake in that activism,”' "How to fight for climate action, according to Isra Hirsi" (Niellah Arboine/Dazed, 05/13/2019);
'“We have shown that we are strong, we are determined,” she said. “I have never – I’ve been a police officer for 36 years – I have never known an operation, a single operation, in which over 700 people have been arrested.''Max Wedderburn, a 13-year-old from Milton Keynes, addressed crowds at the bridge and received cheers and applause. “We are getting bigger, we are getting stronger, we are gathering momentum. Together we can change the future,” he said.'
'Speaking afterwards, he said he became inspired to fight against climate change after learning about it from his mother. He explained: “My lifelong dream is to become a zoologist but I feel there is no point if half of the animals are all dead by the time I reach that goal.”'
'Around 20 activists, most of them aged under 17, had staged a brief demonstration on roads near Heathrow Airport on Friday morning and were arrested. “One thing that is unusual about this demonstration is the willingness of those participating to be arrested and also their lack of resistance to the arrests,” said a spokesperson,' "Extinction Rebellion: More than 750 protesters arrested as climate change activists block London roads for sixth day" (Independent, 04/21/2019);
'The political class, as anyone who has followed its progress over the past three years can surely now see, is chaotic, unwilling and, in isolation, strategically incapable of addressing even short-term crises, let alone a vast existential predicament.'
'Even when broadcasters cover these issues, they carefully avoid any mention of power, talking about environmental collapse as if it is driven by mysterious, passive forces, and proposing microscopic fixes for vast structural problems. The BBC’s Blue Planet Live series exemplified this tendency.'
'Our system – characterised by perpetual economic growth on a planet that is not growing – will inevitably implode.'
'... for a peaceful mass movement to succeed, a maximum of 3.5% of the population needs to mobilise.'
'When a committed and vocal 3.5% unites behind the demand for a new system, the social avalanche that follows becomes irresistible,' "Only rebellion will prevent an ecological apocalypse" (George Monbiot, The Guardian, 04/15/2019);
'[Balkan] rivers (dubbed the Blue Heart of Europe) are in grave danger of being destroyed by corporate banks wanting to turn them into 3,000 hydro dams across a space the size of Italy. The dams would produce hydro energy: one of the most damaging renewable energy sources on the planet which displaces communities, sends species into extinction, and contributes vastly to climate change. Politically, the move is seen as a form of exploitation, where big foreign banks are taking advantage of a politically unstable region...'
'However, if the recent actions of young activists across the Balkans are anything to go by, destroying the Balkans rivers will be a hard battle to win. It's with this resistance that the region welcomes the new age activism in the Balkans: one lensed by London-based photographer and filmmaker Lewis Khan. Released alongside a short film, Khan travelled to Croatia, Slovenia, and Bosnia to document those who's lives are intrinsically intertwinned with the rivers of their countries and those making a pledge to save the Blue Heart,' Photos of the Balkan youth fighting to save their environment (Dazed, 08/24/ 2018);

Alessandro Zir is PhD in Interdisciplinary Studies by Dalhousie University (Halifax, Canada), where Ian Hacking was the external examiner of his thesis. He has publications in Brazil, Canada, Chile, England, Poland, Portugal and USA, including a book (Luso-Brazilian Encounters of the Sixteenth Century, Lanham), and otherwise just "small" works such as chapters of books, literary and movie "criticism", papers, translations, and fragmentary fictional texts. He also plays de piano and has experimented with video and other arts. Among his translations (not even mentioned for the Jabuti) are books from Agatha Christie, Conan Doyle, Georges Simenon, Charles Baudelaire and Petronius (CV in English and Portuguese). Distinctively & as immemorially concocted in the criticism of the likes of F. Wedmore, the posts here assembled have a merit of their own many do not wish to understand (and have little to recommend save the eccentricity of their titles). They do not feel much, though a few find genious in insanity and amateur prodigy (popularity is the only insult that has not yet been offered me, since years ago I became a person of high promise).