Nina (Heitor Dhalia, 2004): in my opinion his best movie, and one of the best movies that were done recently in Brazil.
O Cheiro do Ralo (Heitor Dhalia, 2007) was based upon a book by Lourenço Mutarelli, and the interpretation of Selton de Mello is very convincing; the movie doesn't follow the text literally, and this is clever since the book was written in the first person, by a narrator who is not trustworthy.
À Deriva (Heitor Dhalia, 2009): From the middle to the end, the direction of actors gets better.
Serra Pelada (Heitor Dhalia, 2013);
Árido Movie (directed by Lírio Ferreira, 2005, and also with Selton Mello; for me it has the same metaphorical, dreamlike atmosphere as Dhalia's movies, and passages that feel equally uncanny);
"Naquela Mesa" (composed by Sérgio Bittencourt, here singed by Nelson Gonçalves and in Árido Movie by Otto);
See also:
- Boi Neon (Gabriel Mascaro, 2015);
- Amat Escalante (& Werner Herzog): Basilisk's Cinema;
- desubicarse (Lucrecia Martel — La Niña Santa, 2007);
- Cinema Novo's Judgment Day &/or why it came to last;
- Sonatine (Takeshi Kitano, 1993), Masahiro Shinoda & the tyranny of evil men;
- Cinema of Uruguay (Pablo Stoll);
- El Estudiante, political movie (learning from Argentina);
Postado por A/Z às 8:36 AM 1 comment:
Email ThisBlogThis!Share to TwitterShare to FacebookShare to Pinterest
Marcadores: cinema, Heitor Dhalia, Lourenço Mutarelli, Nina, Selton Mello 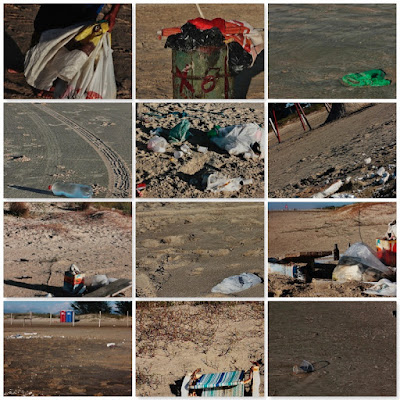 "A total of 1,390 items were collected... Plastic debris (42%) and cigarette butts (39%) were the majority... plastic fragments... straws... bottle caps... plastic bags... cups... candy wrappers... lolly wrappers... February [Summer vacation time] was significantly more contaminated... The majority of sampled marine debris had its most probable source estimated. Land based sources (BEACH USERS) represent 68% of the total amount... Cigarret butts... can be directed related to the fixed backshore KIOSKS and the existence of a FUTBALL COURT on the beach... lack of knowledge of beach users... since rubbish bins are found in all kiosks. In adittion there is NO INSPECTION BY MUNICIPAL AUTHORITIES, and consequently NO GARBAGE CONTROL associated with the fixed kiosks (or with other facilities on the beach)... It was also observed that plastic and other types of solid wastes, such as building debris and grass cuts, are DIRECTLY ABANDONE ON DUNES all year long. The DIRECT THROW OF GARBAGE on the beach demonstrates the IGNORANCE OF BEACH USERS AND RESIDENTS in relation to marine debris problems..." Luana Portz, Rogério P. Manzolli, Juliana A. Ivar do Sul, Marine debris on Rio Grande do Sul north coast, Brazil: spatial and temporal patterns, Revista da Gestão Costeira Integrada 11(1):41-48 (2011);