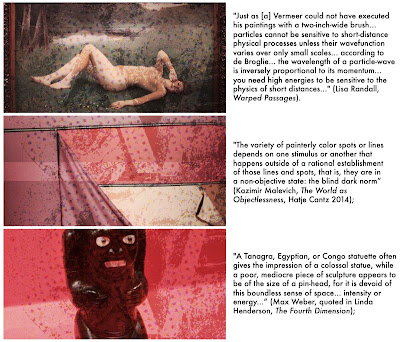 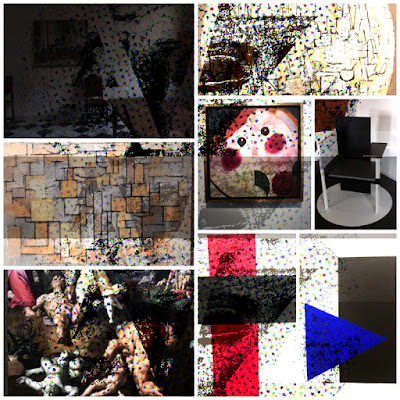 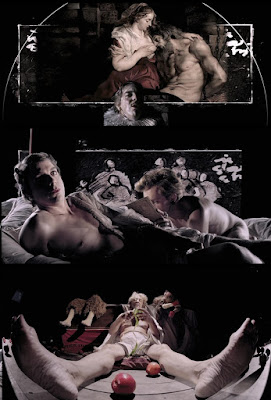 
"For just as the beating is not only punishment for guilt but also a source of pleasure, every other element is similarly ruled by this wild ambivalence, this simultaneous holding of two wholly contrary positions... the peculiar temporality of the matrix... the meanings of all the stages remain suspended within it, in the form of a 'but also'..." (Rosalind Krauss, The Optical Unconscious).
"... Malevich may have reversed the process of dealing with higher dimensional figures by means of their sections of one less dimension. Instead, he may have thought of his colored forms as symbols for three-dimensional bodies moving in a new direction and thus creating both four-dimensional solids and four-dimensional space..." (Linda Henderson, The Fourth Dimension).
"A third way in which hyperspace philosophy may have influenced Malevich... relates to their new, gravity-free space... there is no longer a horizon to establish an up-down orientation... Ouspensky describes infinity as... 'the abyss, the bottomless pit into which the mind falls, after having risen to heights to which it is not native'... a November 1917 letter [from Malevich] to Matyushin states 'I saw myself in space hidden among the points and colored strips, there, in the middle of them, I depart in the abyss..." (Linda Henderson, The Fourth Dimension).
"... quarks and leptons acquire mass in a very similar fashion to the weak gauge bosons... [they] interact with the Higgs field distributed throughout space and are therefore also hindered by the universe's weak charge... [they] acquire mass by bouncing off the Higgs charge distributed everywhere throughout spacetime..." (Lisa Randall, Warped Passages).
"Human life is oppressed by internal causes (both physical and moral) as well as by external factors. It is necessary to fight against both. All that can help us to understand the evils of oppression is useful  to present and future. Therefore it is essential to demonstrate that plastic art can help to clarify this evil... Art is the aesthetic establishment of complete life (unity and equilibrium) free from all oppression..." (Mondrian, as quoted in Charles Harrison's 'Abstraction').
"Man, as the appearance of utmost internality, of spirit, does not posses any point in front, at the side or the back, no fixed point at all towards which he could define a dimension. This explains why in expressing the spiritual, in making spirit an artifact, he will be forced to a moto-stereometric form of expression. This moto-stereometric form of expression represents the appearance of a 4-n dimensional world in a world of three dimensions" (Theo van Doesburg, as quoted in Linda Henderson's The Fourth Dimension).
"Dada completely negates the generally acknowledged duality of matter and mind, woman and man, and in so doing creates the 'point of indifference', a point beyond man's understanding of time and space. For this reason Dada is able to mobilize the optical and dimensional static viewpoint which kept us imprisoned in our (three-dimensional) illusions" (Theo van Doesburg, as quoted in Linda Henderson's The Fourth Dimension).
"The sensation that demands you sit, lie, stand is first of all a plastic sensation that elicits commensurate plastic forms, therefore, the chair, bed, and table are not utilitarian phenomena but only plastic ones, otherwise the artist cannot sense them" (Kazimir Malevich, The World as Objectlessness, Hatje Cantz, 2014).