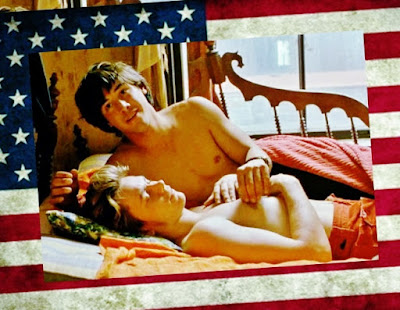 I will say something risky, but intelligence is somersault (salto mortal, in Portuguese):
(1) There is no turning back, avoid self-victimization as much as stress over straitlaced/ghetto-like differences***—those two strategies only aggravate prejudice and stupidity. Even Donald Trump had to take a stand against the shooting attack. Hilary, Obama and the media all around the world were clear in their solidarity towards the victims and complete repudiation of homophobia. It is homophobic people who must feel trapped and they will feel trapped more and more, because this is an irreversible path: the basis of the bourgeois nuclear family (a nineteenth-century European bizarrie) has vanished.
(2) Actually, here lies the real problem, and someone too badly affected by a disease such as homophobia might indeed eventually prefer to see humanity itself vanishing just next (thus shame on play-with-fire demagogical politicians such as Donald Trump).  A single kiss is enough to expose in a flash their own world as a house of cards. A routine of beating their wives up is developed long before they depart to massively shoot strangers—everything out of confusion and frustration. Homophobia kills because it is sad and resentful. Nowadays it is desperate. This man was dead long before he killed. He was waiting to be buried. Authorities were (are still) blind.
(3) Wo aber Gefahr ist, wächst das Rettende auch (Hölderlin).
***There is no contradiction in being gay and disliking ghettos. Bars changed a lot since then, but here is what William Burrough's narrator in Junky says: “A room full of fags gives me the horrors. They jerk around like puppets on invisible strings, galvanized into hideous activity that is the negation of everything living and spontaneous. The live human being has moved out of these bodies long ago... Occasionally, you find intact personalities in a queer bar, but fags set the tone of these joints, and it always brings me down to go into a queer bar.” The narrator doesn't go around shooting people. On the contrary, he denounces a spurious strategy of locking up and doing away with gay people even before one comes out to shoot them. This is a deadly strategy of a fearful and hypocrite society.

"I’ve been struggling with censorship throughout my career first as a poet and journalist in Russia, then as a multimedia artist in the West. My work is still being routinely censored as “pornographic,” “obscene” or “unsafe.” The online censorship of queer imagery is more rampant than ever and the corporate leash seems to be getting tighter and tighter, threatening our fundamental rights and freedoms. These policies inflict pain on our community by destroying any authentic, unfiltered documents of queer sensuality and sexuality. Instead we’re being served with a castrated and homogenised substitute promoted as the “gay norm,”" (Slava Mogutin, "Cruising on Hampstead Heath"/Dazed);
"“I like to change things,” she says. “My thing isn’t only to make music for people to have fun and dance to. I like to make people discuss things and think different. I have a huge LGBT audience, and I’m bisexual – but when you see me, if I don’t tell you I’m bisexual, I don’t have the physical representation of the LGBT (community). It’s different when you’re a drag queen. They’re not treated seriously, or like they’re talented people. So when I invited Pabllo, the idea was to educate people without them feeling like they were being educated. It was super indirect. I invited her to show people: she sings well as fuck – better than me, actually – she dances, she’s super-cool, she’s beautiful, and she’s a drag queen, and she deserves respect,”" (Anitta, "How Anitta became Brazil's biggest pop star"/Dazed);
- Big tech firms need to stop reducing LGBT+ people to their sex lives (The Guardian);
- Justin Trudeau: the rise and fall of a political brand  (The Guardian);
- "Chelsea Manning: Spring 2019" (Dazed);

- The 1970s genderqueer performance artist that turned trash into treasure (Dazed);
- How to be a good online ally to trans and non-binary people in 2019 (Dazed);
- "Mike Pence Booed, Confronted at Hamilton Performance" (Advocate);
- "One in Five Straight Men Watches Gay Sex" (Advocate);


*****Excerpts from a Michèle Lamy & GAIKA interview (Dazed, March 2018):
"I always want to explore ‘radical luxury’ – I mean, I like radical more than I like luxury, and it’s very nice to be able to combine art and the commercial, but it’s one thing to say something, but you need to demonstrate it with the theme. And so we have the collection upstairs and this here (the boxing studio)."
"For me it’s about equality, it’s about honesty. It’s about all these things where I can’t accept the alternative. Like some of the things we just seem to accept in the world as normal. Misogyny, racism, intolerance, you know, we have conversations surrounding these things in the media all the time, but nothing’s changing. And when you think about it, it’s pretty abhorrent. You know, you have to tell men not to rape people, like, including people who supposedly run the world, they have to be told not to rape…"
"I think boxing is a good metaphor for the fight we face and how we should be fighting it. You know, boxing is one-on-one. You look your opponent in the eyes and there are a lot of rules and and there is a lot of respect, traditionally. You know, it brings in a lot of different people; you take people off the street, and kids, and people from all different walks of life, and you see people realise themselves and their potential in the boxing ring. Instead of taking a gun and shooting 20 people in anger, you can be measured and see how to be strong and how to stand for yourself as an individual here."
"The world’s changing and I think the power in the world is shifting and changing. It’s shifting away from the West, it’s shifting away from men, and you’ve got one of two reactions: accept the world is changing and be part of it, or build walls, physically or metaphorically to stop it and to block it out... Yeah, to be like Trump and his wall, you know, in the White House cowering thinking ‘we are the last supreme white beings’, sitting there with his finger on the nuclear button... So extreme. You know, I think that it (Trump’s appointment) made a lot of people wake up..."
"You know, it never really made sense to me – the massive amount of inequality in the world just seems unnecessary. It just doesn’t seem like an efficient way to keep the world turning if you think of it as a machine or a structure. It’s purely about ego as far as I can tell, it’s not even just about the material side of things or money, it’s about dominance."
"... since the dawn of the internet, and people being constantly connected to these violent images every minute, every second, it’s important that the press change too. The media should be analysing themselves and changing the way they do things. I want to see unbiased opinions, I don’t want to see left-wing newspapers or right-wing newspapers. I want to see a tribune that covers it all in a fair way..." Michèle Lamy and GAIKA go head to head on the fight for the future (Dazed, 2018);


'Shally and his friends had been heading to LGBTQ club night KiKi at Khidi, a cavernous techno club on the banks of the Mtkvari river, and decided to stop at Gallery for a drink on the way. “When we got there, police in riot gear with machine guns were blocking the entrance,” explains Shally. “We asked why we couldn’t go in, and what was happening to the people in there, but they kept shouting at us to leave. Eventually one grabbed me by the hair and started beating me, before my friends managed to drag me away...
'“The government is afraid of this new wave of people who are striving to be free and express themselves,” says Rivs, a Khidi mainstay who is at the heart of the city’s pulsing techno scene. “Georgia was always a conservative country, but what some people don’t realise is that if they continue to try and repress us, we will push back harder. The raids didn’t stop people going to the clubs. If anything, there are more parties in Tbilisi than there ever were,”' Tbilisi: altered state (Dazed);
'Some of the most exciting creative movements are forged in the face of great adversity. All around the world, a new generation of talented designers, musicians, and artists are coming together to fight against social repression, political turmoil, and violence with strength, creativity, and passion, as they seek to change not just the world around them, but the world at large...
Across Eastern Europe and stretching out into Russia, this wave of creativity is perhaps at its strongest. Rising from the ashes of the Eastern Bloc and propelled forwards by the likes of Gosha Rubchinskiy and Demna Gvasalia, designers including Anton Belinskiy, Situationist, Akà Prodiàshvili, and Berhasm are asserting themselves as ones to watch in Ukraine, Georgia, and Russia respectively, as part of the final generation to be born under Soviet rule,' Podmost is the wild fashion label rising out of Ukraine (Dazed);
'Kydeeva also redefines the idea of masculinity, as Russia has always been and remains the land of hyper-masculinity and strong heroic men: she liberates her boys from gender conventions, allowing them to be young and sensual, free and open to everything,' Coming of age in 21st century Russia (Dazed);
- Armed police storm Georgian nightclubs leading to a rave outside Parliament (Dazed);
- Hundreds protest in Georgia after police raid night clubs (Reuters);
- The gay ‘Gypsy’ who became Bulgaria’s biggest star (Dazed);
Postado por A/Z às 8:01 AM No comments: Links para esta postagem
Email ThisBlogThis!Share to TwitterShare to FacebookShare to Pinterest
Marcadores: AnOther, Barry Jenkins, David Bowie, Freddy Mercury, Friedrich Hölderlin, Gus Van Sant, Júpiter Maçã, Justin Trudeau, Keanu Reeves, LGBTQIA+, Orlando, Paul Phung, River Phoenix, Rock Hudson, William Burroughs
Newer Posts Older Posts Home
Subscribe to: Posts (Atom)

Alessandro Zir is PhD in Interdisciplinary Studies by Dalhousie University (Halifax, Canada), where Ian Hacking was the external examiner of his thesis. He has publications in Brazil, Canada, Chile, England, Poland, Portugal and USA, including a book (Luso-Brazilian Encounters of the Sixteenth Century, Lanham), and otherwise just "small" works such as chapters of books, literary and movie "criticism", papers, translations, and fragmentary fictional texts. He also plays de piano and has experimented with video and other arts. Among his translations (not even mentioned for the Jabuti) are books from Agatha Christie, Conan Doyle, Georges Simenon, Charles Baudelaire and Petronius (CV in English and Portuguese).