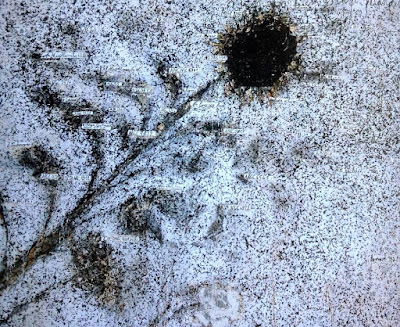 ***My view is somewhat warped, and a fair, accessible statement of Smolin's position can be found here,  written by himself: What should be worried about (Edge.org).
The comments written by him (3/26/2018, 3/23/2018) in the following blog of Peter Woit are also interesting: Not Even Wrong.
And this is a video of a talk in which he explains his views very clearly, and point to political implications of it, in particularly concerning our present situation and global warming: A New Theory of Time (Royal Society for the encouragement of Arts);
***NEW (Nov/2018):

"If this particle really exists, then it is not just outside the standard model but outside it in a way that nobody anticipated. Just as Newtonian gravity gave way to Einstein's general relativity, the standard model will be superseded. But the replacement will not be any of the favoured candidates that has already been proposed to extend standard model: including supersymmetry, extra dimensions and grand unification theories," Roger Barlow, LHC is hitting a tantalising new particle (The Conversation);

"For D'Espagnat, it is exactly if we consider seriously and realistically certain results of physics that we have to open the two complementary perspectives. D'Espagnat welcomed these complementary perspectives grounding himself on the many violations of CHSH-Bell inequalities obtained experimentally since the 1980s," Alessandro Zir, Luso-Brazilian Encounters of the Sixteenth-Century: A Styles of Thinking Approach (Fairleigh Dickinson Univ. Press, 2011, p. 66).
"Since the 1960s... the rigid determinism of old-style physics has given way to a recognition of an inherent spontaneity in nature—through indeterminism at the quantum level, through non-equilibrium thermodynamics, and through the insights of chaos and complexity theories. In cosmology, there has been the recognition of a kind of cosmic unconscious through the discovery of 'dark matter,'the nature of which is utterly obscure, but which nonetheless seems to constitute some 90-99 percent of the matter in the universe. Meanwhile, quantum theory has revealed strange and paradoxical aspects of nature, including the phenomenon of non-locality..." Rupert Sheldrake, Seven Experiments that Could Change the World (Riverhead books, 1995).
"... locality comes when we try to force it into a particular framework. And, that’s the explicate order. So, what I’m saying is, what traditionally science has felt is essential, is only an outward manifestation. And I, I don’t think many scientists would agree. I don’t think they have grasped, are willing to grasp that, or willing to think about this idea," Basil Hiley, interview.

"The distance between two particles [in microphysics] is determined by the minimal number of particles necessary to form a chain of coincidences between the given particles" (Max Jammer, Concepts of Space, 1993, 188).
"A profound epistemological analysis of certain quantum-mechanical principles seems to suggest that the traditional conceptions of space and time are perhaps not the most suitable frame for the description of microphysical processes... In his discussion of electron transitions between stationary states within the atom, Niels Bohr already called such processes 'transcending the frame of space and time'" (Jammer, 189).
"Les données de nos perceptions nous conduisent à construire un cadre de l'espace et du temps où toutes nos observations peuvent se localiser. Mais le progrès de la Physique quantique nous amènent à penser que notre cadre de l'espace et du temps [as classically or ordinarily understood] n'est pas adéquat à la véritable description des réalités de l'échelle microscopique" [Louis de Broglie] (Jammer 189).
"[concepts of space and time] arise from, but do not have analogs in, the properties of microscopic particles, in the same way that thermodynamic properties arise as a result of interactions among the many actually existing particles of the universe" [E. J. Zimmerman] (Jammer 238).
"... it has been suspected that the perplexities of quantum phenomena phenomena may arise from the tacit assumption that the notions of length and duration, acquired primarily from experiences in which the average effects of large numbers of quanta are involved, are applicable in the study of individual quanta" [Arthur Stanley Eddington] (Jammer 238).
"A detailed prescription for constructing space according to purely combinatorial principles associated with the spin of particles was put forward in 1971 by Roger Penrose. His point of departure was the awareness that the two basic space-time manifolds of modern physics, the real four-dimensional space-time continuum of relativity and the fictitious infinite-dimensional complex Hilbert-space continuum of quantum mechanics, are unrelated to each other" (Jammer 238-39).
"Geometry in the small would seem to have to be considered as having a foam-like [stochastic] character" [John Archibald Wheeler] (Jammer 240).
"... the idea of using noninteger dimensionalities had been used in statistical physics in the early Seventies... After Benoit B. Mandelbrot had shown that the study of physical phenomena in noninteger-dimensional spaces, or 'fractal dimensions,' is a logically consistent possibility, such investigations gained wider attention" (Jammer, 248).
"That galgaxy-galaxy and cluster-cluster correlations as well as other cosmologically large structures can be studied, preferably in a framework of fractal dimensionalities, has recently been show by Siaochun Luo and David N. Schramm" (Jammer 250).

Now, here lies the WRONG path:
"During the classical period of work on unified field theories in the Thirties and Forties, [theories that unify fundamental forces by postulating space-times of more than four dimensions and incorporate quantum mechanics] became the subject of considerable interest... In some cases, as in the case of Einstein, this work was motivated by the hope that the unobserved fifth dimension could provide hidden variables to eliminate the indeterminacies from quantum mechanics" (Jammer 245).

Quis ille? Paucis accipe: of a breed holding by ancient roots to the heights of Rotzo (& later marooned in the bogs of the land of the Southern lapwing), Alessandro Zir is PhD in Interdisciplinary Studies by Dalhousie University (Halifax, Canada), where Ian Hacking was the external examiner of his thesis. He has publications in Brazil, Canada, Chile, England, Germany, Poland, Portugal and USA, including a book (Luso-Brazilian Encounters of the Sixteenth Century, Lanham), and otherwise just "small" works such as chapters of books, literary and movie "criticism", papers, translations, and fragmentary fictional texts. He also plays de piano and has experimented with video and other arts. Among his translations (not even mentioned for the Jabuti) are books from Agatha Christie, Conan Doyle, Georges Simenon, Charles Baudelaire and Petronius (CV in English and Portuguese). Distinctively & as immemorially concocted in the criticism of the likes of F. Wedmore, the posts here assembled have a merit of their own many do not wish to understand (and have little to recommend save the eccentricity of their titles). They do not feel much, though a few find genious in insanity and amateur prodigy (popularity is the only insult that has not yet been offered me, since years ago I became a person of high promise; scandal—oh mystère effroyable, paradoxe, aporie: trop d'exemples, un à chaque pas, aaaaai, larvale simulacrum, tô com fome! however, is an insidious form of fame). Living in a bye corner of the kingdom.