Brazil After Rousseff's Impeachment, State Violence & the US 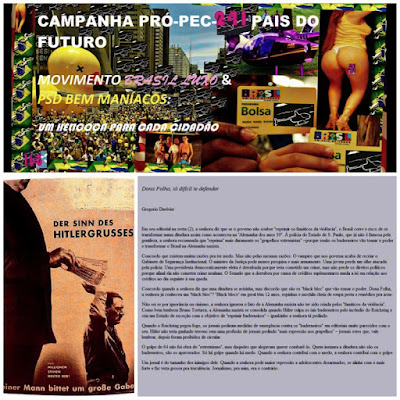 John Heartfield
Millions Stand Behind Me! (1932)
Text by Gregorio Duvivier;
Videos of State Violence after the impeachment in Brazil;
Bonna Petit!!! (A/Z, 2017) (for more see here);
Police Militarization in the US:
"'Do not Resist': the police documentarization everyone should see" The Intercept;
Ex-president Lula interview (Mônica Bergamo & Florestan Fernandes, 27/04/2019);

Glenn Greenwald interview (Democracy Now!)
"The perception of this process was shaped by Brazil's domestic media, which is an oligarchic media, they are owned by a tiny number of extremely rich families..."
"...Le Monde, the largest and most influential paper in France, one of the most influential in the world, denounced the impeachment, they said it was not a coup it is a farce... you have international transparency groups... denouncing it, the Organization of American States, members of the European Parliament, the British Parliament, and now senator Sanders..."
"The US government has been remarkably silent about what has been taking place in Brazil for the obvious reason that they got caught in the 1960's having participating in it, helping to plan the coup against the left wing democratically... elected government after vehemently denying for years they have been involved... documents surfaced showing that they were critical participants in that coup and also supported the military dictatorship that followed…"
************************************************************

I'm against conspiracy theories in general, but the US recognized Michel Temer's government as soon as the impeachment was over.
Now we are exposed to this kind of violence, and the impeachment itself was a result of a very dubious process in which organizations (such as the MBL) said to be financed by private institutions in the US played indeed a role.
When the US government recognizes the outcome it embraces the whole process.
Conspiracy theories become then much more plausible.

***Report from Vice (18/10/2016) in which students and their parents say they have been harassed by the police. The ombudsman of São Paulo State Police tells that the situation reminds him of the dictatorship period. This IS SERIOUS:
- "Manifestantes se dizem perseguidos pela polícia de São Paulo" Vice;