God Save the Queen (Blake's Palace of Wisdom) 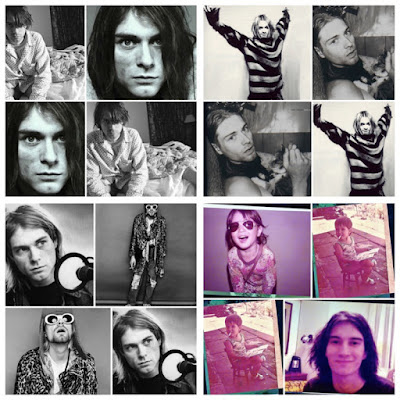 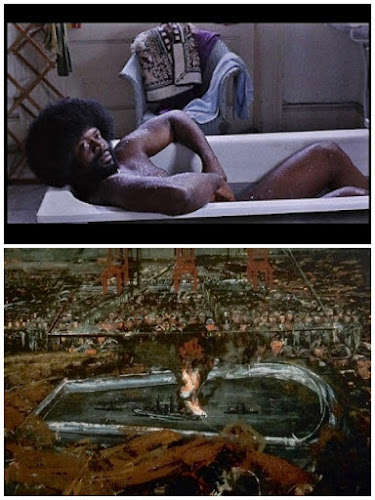 "I just thought Richard Hell was incredible. Here was a guy all deconstructed, torn down, looking like he'd just crawled out of a drain hole, looking like he was covered in slime, looking like he hadn't slept in years, looking like he hadn't washed in years, and looking like no one gave a fuck about him. And looking like he didn't really give a fuck about you!"
Malcolm McLaren (Please Kill Me)
"I liked Malcolm because he liked me... There weren't that many people who gave us any respect, you know?"
Richard Hell (Please Kill Me)
"The first song that the Sex Pistols played was I Wanna Be Your Dog, the greatest punk song ever written to this day."
Danny Field (Please Kill Me)
"The profanity hooked me first (I was fourteen), Johnny Rotten's 'fuck this and fuck that/Fuck it all and fuck her fucking brat.' More than the naughty words themselves, it was the vehemence and virulence of Rotten's delivery—those percussive 'fucks,' the demonic glee of the rolled rs in 'brrrrrrrat.'"
"From that point onward, McLaren decided that Rotten was at heart 'a constructive sissy rather than a destructive lunatic,' and focused his energy on molding the more suggestible Sid Vicious into the Pistol's true star, a cartoon psychopath, wanton and self-destructive."
"Although they found nothing, Lydon was taken to the local police station and had to walk home in his pijamas."
Simon Reynolds
"Andy said to me, 'Don't... don't... don't make me laugh. I hurts too much."
Billy Name (Please Kill Me)
"In a desperate plea for the attention of her idol, she snatched Andy Warhol's wig."
James St. James (Party Monster)
"... et du chaos d'un sommeil plein de songes tu évoques à la lumière du soleil les visages des beautés depuis longtemps ensevelies, et les physionomies familières et bénies, nettoyées des outrages de la tombe. Toi seul, tu donnes à l'homme ces trésors, et tu possèdes les clefs du paradis, ô juste, subtil et puissant opium!"
Baudelaire/De Quincey (Les Paradis artificiels)
"... virei mentor dum garoto judeu e gay... Eu dizia, você não acredita em nada? Marilyn Monroe? Elvis Presley, George Harrison?"
Júpiter Maçã, A Odisséia
"What's wrong with tits? The queen's got'em."
Geri Miller (Please Kill Me)

"After the gig we were visited in our dressing room by none other than Lady Helen Windsor, a minor royal and great-granddaughter of King George V. Seems she was a mad Cure fan, too! Truth is stranger than fiction, truly."
Lol Tolhurst (Cured: the tale of two imaginary boys)
"The society ladies who appear to Bloom, Mrs. Yelverton Barry (a name modified from that of a suspected transvestist) and Mrs. Bellingham (an actual name) are as fond of wearing furs as Wanda."
Richard Ellmann
"Dr. Spock personalizes quantum psychology: 'Treat your kids as individuals, as singularities.' Here was the most radical, subversive social doctrine ever proposed, and it was directed to the only groups that can bring about enduring change: parents, pediatricians, teachers."
Timothy Leary

"Now, Sir, if I conduct you home again into this warmer and more luxuriant island, where you perceive the spring tide of our blood and humours runs high,—where we have more ambition, and pride, and envy, and lechery, and other whoreson passions upon our hands to govern and subject to reason,—the height of our wit and the depth of our judgment, you see, are exactly proportioned to the length and breadth of our necessities,—and accordingly, we have them sent down amongst us in such a flowing kind of decent and creditable plenty, that no one thinks he has any cause to complain. It must however be confessed on this head, that, as our air blows hot and could,—wet and dry, ten times in a day, we have them in no regular and settled way;—so that sometimes for near half a century together, tehre shall be very little wit or judgment, either to be seen or heard of amongst us..."
Tristram Shandy
"The fashions which Charles II brought with him and which were adopted by his Court were among the strangest male garments ever worn. Subsequent historians have regarded them with an unfavourable eye. 'Taste  and elegance', says F. W. Fairholt, 'were abandoned for extravagance and folly.'"
"In essence the change consisted of a decreasing emphasis on the French Court style and an increasing adoption of English country clothes. There was, in short, a trend towards practicality and simplicity. Coats were plain, had narrower cuffs and the skirts were sometimes cut away in front for ease on horseback."
"This was due in no small degree to the  superior skill of London tailors, trained to work in wool broadcloth. Such cloth, unlike light silk and other flimsy materials, can be stretched and moulded to the body. The clothes of the eighteenth-century aristocrat were in general very badly made and did not fit at all snugly to the body. Such snug fitting was the very essence of dandyism, and George Brummell prided himself on the fact that his clothes did not show a single wrinkle and that his breeches fitted his legs like a natural skin. Dandyism does not imply gorgeousness in male attire; the exact  opposite is the case."
"The dandy was shown not only by the cut of his clothes and the snugness of his breeches but by the elaboration of his neckwear. The collar of the shirt was worn upright; the two points projected on to the cheeks and were kept in place by a neckcloth, either in the form of a cravat or a stock. Some dandies were alleged to spend a whole morning in the arrangement of their cravats... There is the well-known story of a caller visiting Brummell in the middle of the morning and finding his valet arranging his cravat. On the floor was a large heap of discarded cravats, and when the visitor inquired what they were, the valet replied, 'Sir, those are our failures.'"
"Of course the dandies, who still persisted into the 1840s, spent very much more than this. They were regarded as relics of a former, dissipated age. The dominant figure in English life was now a respectable bourgeois, who had no desire to make himself conspicuous but wished merely to present a gentlemanly appearance..."
"Like the King [Edward] himself it favoured the mature woman, cool and commanding with a rather heavy bust, the effect of which was further emphasized by the so-called 'health' corsets which, in a laudable effort to prevent a downward pressure on the abdomen, made the body rigidly straight in front by throwing forward the bust and throwing back the hips. This produced the peculiar S-shaped stance so characteristic of the period."
"As a commentator of the time remarked, 'the angular English woman, over whose lack of embonpoint papers like La Vie Parisienne have been making merry for two generations, now became accepted type of beauty."
"Young people around the globe danced to the new American rock 'n' roll music, and it was from this date that the fashion and music-industries became inextricably linked."
"The chief fashion story of the period was the miniskirt. Hemlines rose just above the knee in 1961 and had reached the upper thighs by 1966.... It was a style best suited to a skinny, pre-pubescent physique, epitomized by the schoolgirl model Lesley Hornby, known as Twiggy... The designer most often credited with introducing the 'mini' was Mary Quant..."
"The anarchic Punk style, which appeared on the streets of London during the mid-1970's, and which spread in diluted form throughout Europe and North America, was to have an enormous impact on both streetwear and high fashion. It was a style which consciously sought to shock, combining—for both sexes—black tight trousers and striped mohair sweaters with customized leather jackets and heavy-duty Doctor Marten boots. Some female Punks wore miniskirts, fishnet tights and high stiletto-heeled shoes. Fetishistic leather and rubber were an integral part of the Punk look, as were trousers with bondage straps from knee to knee, and bondage collars. Clothes were slashed and ripped, embellished with safety  pins, zips and studs. T-shirts were printed with aggressive, anarchistic slogans. The most famous retail outlet for Punk garments and accessories was the shop Seditionaries in London's King's Road, run by Vivienne Westwood and Malcolm McLaren..."
"American retailer The Gap, founded in San Francisco in 1969, universalized the popularity of garments such as the hooded sweatshirt and cargo pant (the latter contributing to a massive downsizing in teh denim market), making once-basic items a wardrobe staple for all generations."
James Laver (Costume and Fashion)
See also:
- Kur-d-t My Ghost;
- Alice in Chains (Moore Theatre, Seattle, 1990);
- who is afraid of Sylvia Plath? (& e. e. cummings);
And also: